In the debate over marine mammals in captivity, the public display industry i.e. Sea World maintains that marine mammal exhibits serve a valuable conservation function, people learn important information from seeing live animals, and captive marine mammals live a good life. However, animal protection groups and a growing number of scientists counter that the lives of captive marine mammals are impoverished, people do not receive an accurate picture of a species from captive representatives, and the trade in live marine mammals negatively impacts populations and habitats. The more we learn of marine mammals, the more evidence there is that the latter views are correct. The public display industry has asserted for many years that the display of marine mammals serves a necessary educational purpose, for which the animals’ welfare need not be compromised. Mostly, this assertion has gone unchallenged. But as news gets out via documentaries such as The Cove and Blackfish which expose the traumatic captures, barren concrete tanks, high mortality rates, and aberrant—even dangerous—animal behavior, people are changing the way they “view” animals in captivity.

Some facilities promote themselves as conservation enterprises; however, few such facilities actually are involved in substantial conservation efforts. Rather than enhancing wild populations, facilities engaged in captive breeding tend merely to create a surplus of animals who may never be released into the wild and are therefore only used to propagate the industry.

Contrary to popular perception, captures of wild marine mammals are not a thing of the past. Live captures, particularly of dolphins, continue around the world in regions where very little is known about the status of populations. For smaller stocks, live capture operations are a significant conservation concern. Even for those stocks not currently under threat, the lack of scientific assessment or regard for welfare makes the proliferation of these operations an issue of global concern.

The public display industry maintains that it enhances the lives of marine mammals in captivity by protecting them from the rigours of the natural environment. The truth is that marine mammals have evolved physically and behaviourally to survive these rigours. For example, nearly every kind of marine mammal, from sea lion to dolphin, travels large distances daily in a search for food. In captivity, natural feeding and foraging patterns are completely lost. Stress-related conditions such as ulcers, stereotypical behaviours including pacing and self-mutilation, and abnormal aggression within groups frequently develop in predators denied the opportunity to hunt. Other natural behaviours, such as those associated with dominance, mating, and maternal care, are altered in captivity, which can have a substantial impact on the lives of these animals.

Wild-caught marine mammals gradually experience the atrophy of many of their natural behaviors and are cut off from the conditions that allow the expression of cultural traits such as specialized vocalizations and unique foraging techniques. Viewing captive animals gives the public a false picture of the animals’ natural lives. Worse yet, it desensitizes people to captivity’s inherent cruelties—for so many captive marine mammals, the world is a tiny enclosure, and life is devoid of naturalness.
Public display facilities often promote themselves as stranding and research centers. In fact, most stranded marine mammals, especially whales and dolphins, die after they are rescued; few survive rehabilitation to be released to the wild; many releases are not monitored for success; and some animals, despite their suitability for release, are retained for public display. As for research, most studies using marine mammals in public display facilities are focused on improving captive care and maintenance practices so that they can propagate their business of captivity for profit –very few of them address crucial conservation questions.

With any marine mammal exhibit, the needs of the visiting public come before the needs of the animals. Enclosures are designed to make the animals readily visible, not necessarily comfortable. Human-dolphin interactions such as “swim-with-the-dolphins” encounters and so-called petting pools do not always allow the animals to choose the levels of interaction and rest they prefer or need. This can result in submissive behavior toward humans, which can affect the dominance structure within the dolphins’ own social groups. Furthermore, petting pool dolphins, who are fed continuously by the visiting public, can become obese and are at risk of ingesting foreign objects. The public display industry fosters a benign—albeit mythical— reputation of marine mammals, particularly dolphins. This consti- tutes a form of miseducation. These species are for the most part carnivores with complex social hierarchies and are perfectly capable of injuring fellow group members, other marine mammals, and humans. The risk of disease transmission in both directions (marine mammal to human and human to marine mammal)  is also very real. Marine mammal handlers have reported numerous health problems related to their work.

The ethical concerns raised by marine mammal captivity are especially marked for dolphins, as they may well merit the same moral stature as young human children. Although public display advo- cates will argue that claiming dolphins have “rights” is based solely on emotion and that these marine mammals are no different from other wildlife species in captivity, in fact the behavioral and psy- chological literature abounds with examples of the sophisticated cognition of dolphins. Their intelligence appears at least to match that of the great apes and perhaps of human toddlers—they are self-aware and capable of abstract thinking.

Fierce debate continues over the issue of mortality rates and longevity, especially of whales and dolphins, in captivity. 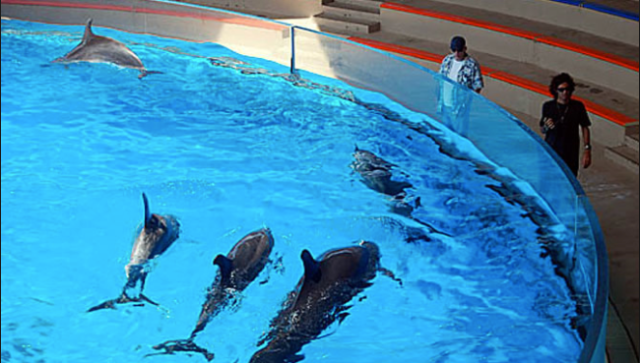 The most conclusive data are for orcas; their annual mortality rates are significantly higher in captivity than in the wild. The mortality data related to live captures are more straightforward—capture is undeniably stressful and, in dolphins, results in a six-fold increase in mortality risk during and immediately after capture.
While humans can subdivide the captive experience and even conclude that one aspect is more or less damaging to the animals than another, the totality of the captive experience for marine mammals is so contrary to their natural experience that it should be rejected outright.  For all of the reasons that have been outlined we believe it is wrong to bring marine mammals into captivity for the purpose of public display and entertainment.
Reprinted from the Humane Society of the U.S. (HSUS) and World Society for the Protection of Animals (WSPA)